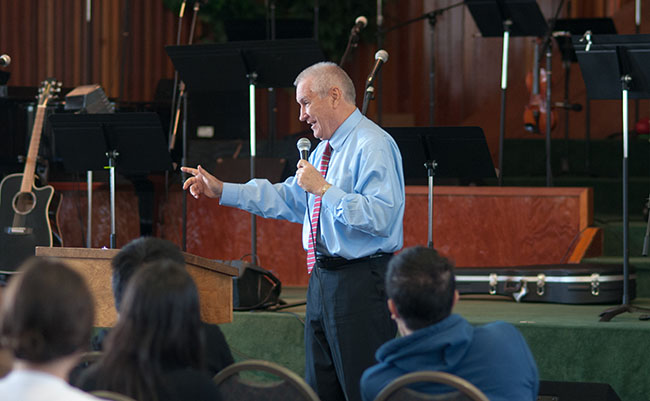 “David didn’t become King David until he faced the challenge of the giant. The difficulty created the opportunity.” – Doug Wead Doug Wead is a New York Times bestselling author and a former adviser to two American presidents. He also is a motivational speaker throughout the world and has been the president of Canyonville Christian Academy since 1995.

In Canyonville Christian Academy’s chapel, Mr. Wead spoke about the life of David from the Bible. David was a shepherd and the youngest of 7 brothers. Even though David had talents and was a gifted musician he had to attend to the sheep while his older brothers were off at war. Later, David would find that his true calling was to become the King of Israel. So, how did a young shepherd boy rise to greatness and become the leader of a nation?

What brought out David’s leadership was the challenge of the giant Goliath. David could have stayed at home and may have still been happy. But it was the difficulty of facing his giant that brought out the character and bravery of David that would lead him on the path of becoming a King.

Students and staff were encouraged with this great lesson from history from one of America’s great historians and authors.  It was also a special treat for Doug Wead  in this chapel to look upon his son, Joshua Wead as he led the student body in worship.